FIXING MISTAKES OF THE PAST

Over the past century, we covered our communities with pavement and hard surfaces in the form of roads, sidewalks, parking lots, roofs, and more. These existing hard surfaces are not generally affected by the rules to reduce stormwater pollution from new construction projects. How can we make sure these surfaces are not providing a pathway for pollution to the Sound?

Many residents in our region have stepped up and taken individual action to filter, slow, and collect stormwater, by installing rain gardens and cisterns at their homes and in their communities. These mitigation efforts reduce the amount of polluted stormwater flowing into our waterways. You can check out progress voluntarily reported by community members here. As of December 2021, community members reported 11,007 unique stormwater projects throughout the Puget Sound region. Unfortunately, the biggest infrastructure projects with the biggest footprint—including roads, bridges, and public facilities—are owned or controlled by municipalities.

The Washington State Department of Ecology requires our most populous cities and counties to install stormwater retrofits to treat or control stormwater from existing development. This requirement has been in place since 1995. However, these requirements only apply to “Phase I” Permittees: Seattle, King County, Snohomish County, Pierce County, Tacoma, and Clark County. Today, many other municipal Permittees are just as populous, and just as developed, as these Phase I Permittees. Yet they lack retrofit requirements.

In 2020, Soundkeeper and WEC realized that there was no comprehensive assessment or public report about municipal progress toward stormwater retrofit investments in the region. We collaborated to research and report on how many and where our most populous cities and counties have installed Structural Stormwater Controls—stormwater investments including stormwater retrofits—from 2007 until today.

WHO DID WE ASSESS?

We looked at five Phase I Permittees: Seattle, Tacoma, King County, Pierce County, and Snohomish County; and seven Phase II Permittees: Bellevue, Everett, Kent, Federal Way, Renton, Thurston County, and Kitsap County. The five Phase I’s have had legal requirements to install stormwater retrofits since 1995. The projects are required as part of Phase I’s requirement to implement a Structural Stormwater Control (or SSC) Program. The seven Phase II cities and counties we looked at meet or exceed the population thresholds defining Phase I’s. To date, they do not have any retrofit requirements.

In other words, the Phase II Permittees have population, development, and resource use impact comparable to Phase I Permittees, yet lack the same level of regulation.

What Did We Discover? 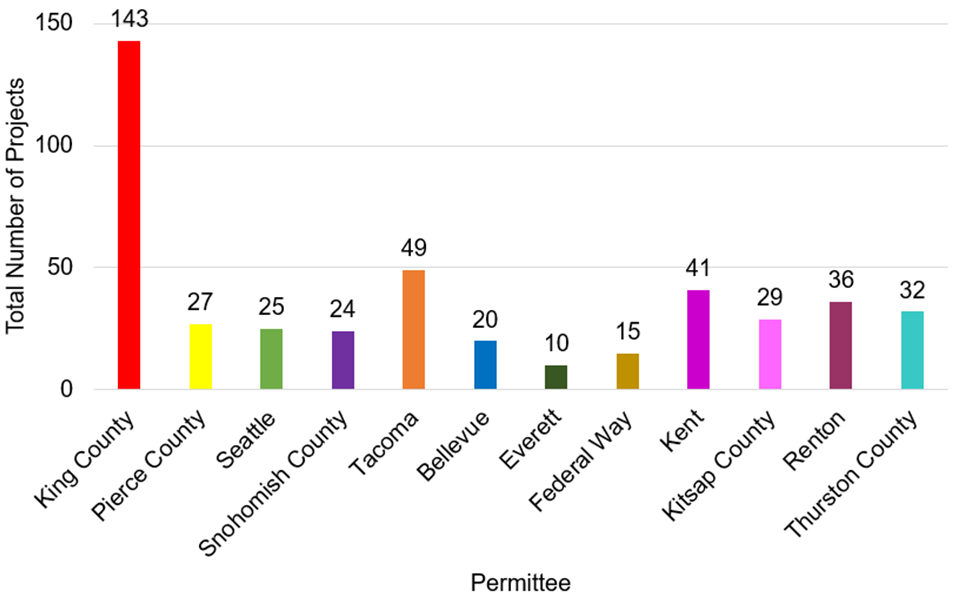 As a result of our research, we identified 451 total qualifying Structural Stormwater Control (SSC) projects that were planned or completed by the twelve most populous Puget Sound Permittees we assessed.

The five Phase I’s reviewed include jurisdictions that cover almost half of the Puget Sound basin or drainage area. Over the 15-year period we studied, these Phase I municipalities reported 268 (qualifying) SSCs, which averages to less than 18 projects combined a year. In comparison, the seven Phase II’s we reviewed (that do not have an SSC requirement) did 183 SSC projects, or a little more than 12 projects combined a year.

The 11 qualifying Structural Stormwater Controls—the projects that municipalities must complete in order to be in compliance with their permit requirements—can generally be categorized into four function types:

SSC projects in the Flow Control and Toxics Reduction function types include projects that actually retrofit the built environment to treat and control stormwater pollution. While SSC projects in the Restoring Ecosystem Function and Maintenance and Prevention function types are also valuable and can protect clean water; due to their nature, these SSC projects often do not retrofit the built environment. Instead, they are often used to preserve less developed areas.

Find out more about the 11 qualifying SSC project types, and how we categorized them into four function types, here.

You can find out more about the GIS maps we used to perform these analyses, and see all of the SSC projects mapped, in our Storymap.

We found that permittees could do a better job of proactively planning and implementing stormwater retrofits in dense, highly urbanized areas; in areas with heavily impacted salmon streams; and in areas with and greater environmental health disparities. Soundkeeper and WEC believe that investments in these areas will yield more meaningful benefits by improving healthy outcomes for the most at-risk people and wildlife. 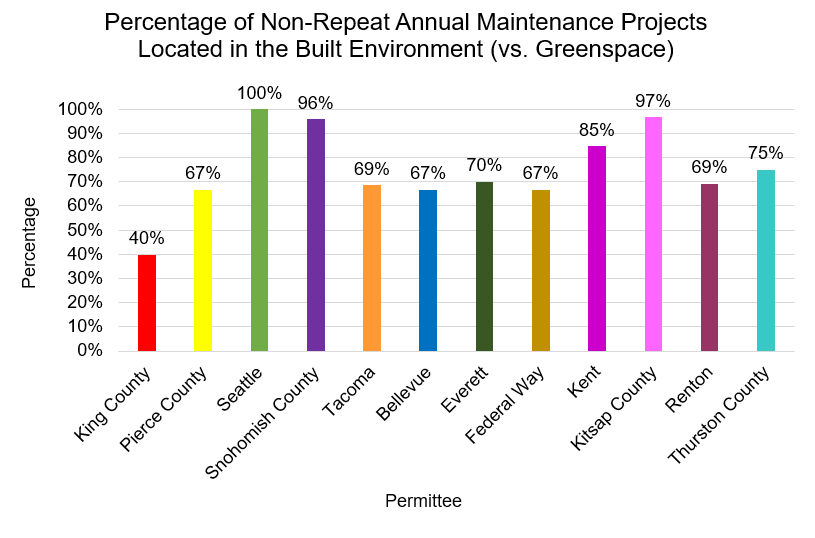 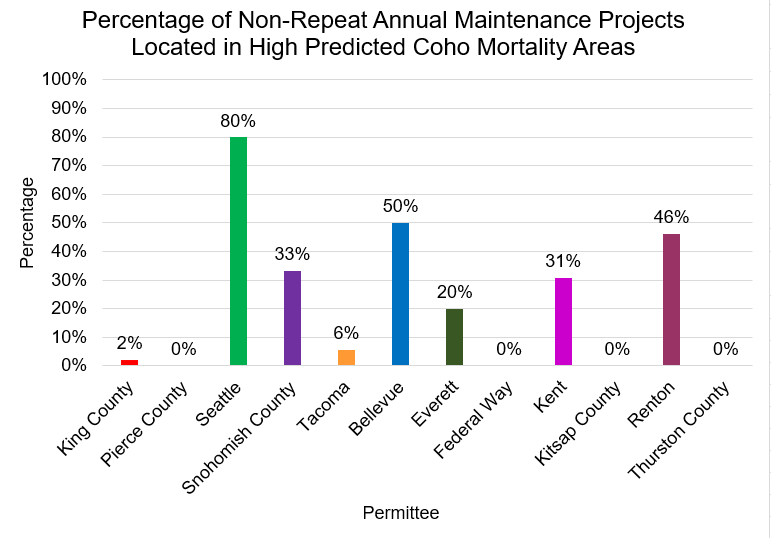 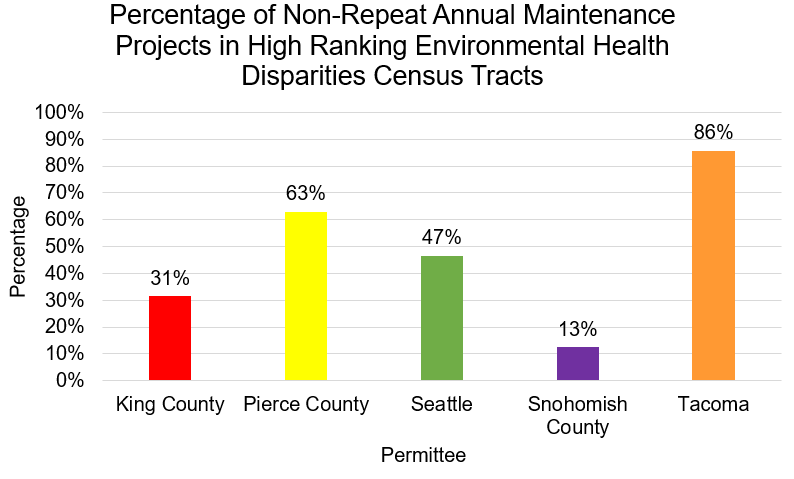 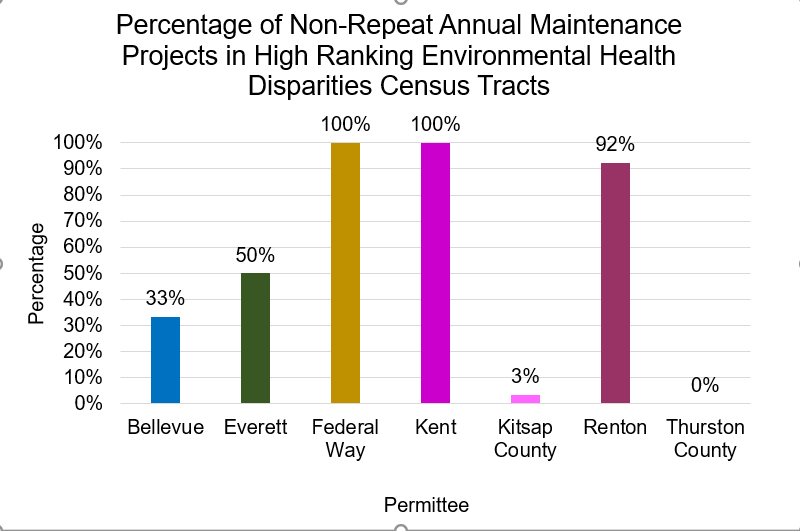 Our Conclusions, and Recommendations for the Department of Ecology

As a result of our research, we found that:

As such, we recommend that the Department of Ecology strengthen the municipal general stormwater permits to:

Despite that Permittees have been investing in stormwater infrastructure for decades, and that individual SSC projects are very valuable: we found no evidence that current regulatory requirements or approaches are making a dent on overall Puget Sound water quality.

This is not due to lack of effort, or because these projects made no improvement to water quality locally. There have been many small successes. Our municipalities have done a good job juggling competing priorities with limited resources, and implementing stormwater treatment and controls as they are able.

Preventing and treating stormwater pollution requires more funding, political and regulatory support in the form of a clear mandate to save Puget Sound. You can help by reaching out to your local elected officials today, to express your concerns and interest in local stormwater pollution controls.

The Department of Ecology must also strengthen existing Clean Water Act Permit requirements by setting out a clear path to restore Puget Sound. The proven effectiveness of LID and Green Stormwater Infrastructure will be key in accomplishing this goal.

To learn more about our findings and conclusions, explore the Storymap and Report, and then take action here!

What does a healthy, vibrant neighborhood look like to you? Your vision should drive the decisions of your local elected officials. Your city and county councils are making budgeting decisions in 2022 about how to plan for growth, and protect water quality and salmon habitat. Make sure they are prioritizing green stormwater infrastructure and LID by taking action today.

By taking action you can help shape the future you want to see. Check out this Local Stormwater Pollution Controls Storymap to see how your city or county is doing; then let your local representatives know you expect LID and retrofits to protect water quality in your community.

Low-impact development (LID) strategies, such as green roofs, permeable pavements, and rain gardens, use or mimic natural processes to collect and filter stormwater runoff before it can reach our waterways. It’s the best alternative to development that would otherwise cause stormwater pollution to flow directly into the Puget Sound. LID protects our communities and wildlife.

What is a Stormwater Retrofit?

Stormwater retrofits treat (aka “filter”) or control (aka “slow”) polluted stormwater runoff from existing development. These projects address areas that were developed without LID or green stormwater infrastructure. Stormwater retrofits are critical to protecting Puget Sound as our communities grow and the climate changes.